Tesco were in the news this week after announcing the likely divestment of the Fresh & Easy supermarket chain, that they have poured around $2billion into since opening the first stores in California in 2007. It seems that the retail behemoth has failed in the US retail market just as so many other British companies (Marks and Spencer, Sainsbury’s, WH Smith, HMV and Dixons) have done before them. So what went wrong? Can an analysis from a consumer psychology perspective help explain this failure?

Let’s take a quick look at a typical store.

If you delve further into the hundred or so pr videos, this brand looks amazing! The staff are pretty cute, and they have a funky low-rider bike, a Dr. Who Tardis in the office and flashmobs. Those crazy kids! I want to work there right now! Oh except I can’t. No one can because they are closing up shop. Something went very wrong at Fresh and Easy.

We know from Burke (2005) that there has been a dramatic increase in the number of products in stores since the 1990’s. In fact many large retailers will carry 100,000 products in a single store. Burke suggests that this makes it hard to navigate through the store, assess products and choose between brands. As George Miller pointed out in 1956 in Miller’s Rule, this is because our short-term memory is limited to only between five and nine different ideas at one time. So the larger the store, the greater the potential for confusing and overwhelming the consumer. This indicates that Fresh and Easy made the right choice in going for a smaller store design.

Lang et al. (2012) recently conducted a comparison of smaller format supermarkets in the US and found that Fresh and Easy pursued a non-traditional concept focusing more on private label products than Wal-Mart and Safeway, who went for a ‘scaled-down supermarket’ approach. The study concludes that the latter strategy appears to have been more effective. So although they got the scale right, F&E made the mistake of selling too many private label products when Americans are more familiar with national brands. Private label brands are increasing in number in the US although they have only just reached the level where one in four products in an American supermarket is a store brand (according to the Private Labels Manufacturers Association).

Dursan et al. (2011) have confirmed that perceived quality and familiarity have a direct effect on purchase intention. US customers would not have been familiar with the F&E brands and as a result may have not purchased them. Dunne and Narasimhan (1999) found that own brand labels account for only about 25% of sales in Canada and USA and that the proportion is higher in Europe. 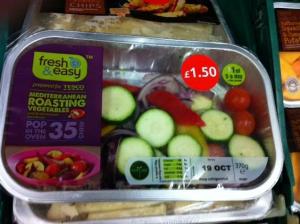 Writer Lynne Bateson has explained many of the problems in this article in the Guardian. Clearly the F&E name was a problem from the start. Could it be a deodorant or a sanitary product wondered Californians? I’m sure it was based on hours of focus group research but that is no guarantee of public acceptance. Then there were the cultural differences. American shoppers love the coupon culture and in Britain it’s just not a big part of supermarket culture. Americans are also less loyal to supermarkets than shoppers in the UK and they will go wherever the best deals are. (An SMG study found that around 80% of UK shoppers are loyal to their supermarket brand. Compare this to Ernst & Young’s findings that only about 25% of Americans say that brand loyalty impacts their buying behaviour.)

Here are some interesting words from commenters on a recent Guardian story about the failure: Jetsons, sterile, plastic-wrapped, no music, clinical, no hyperactive workers. It seems like there was a problem with the store atmospherics. According to Bateson, early ads from F&E positioned the store as a kind of Trader Joe’s (a warm and fuzzy chain with ‘trading post’ decor) but the reality of the F&E store design was more cold and antiseptic and ‘more like aircraft hangars.’ 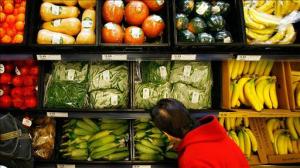 Despite all its effort to integrate with American cultural norms, the failure of F&E to sell typical British products like HP Sauce also frustrated shoppers. People thought they would be able to try some traditional British food and this was only added as an afterthought. I’m surprised that this was an issue since I thought that most Americans weren’t keen on British food like pork pies and haggis etc.

Brand congruence is always important and the reality of the stores often didn’t live up to the ‘Fresh’ and the ‘Easy’ of the name. The quality of the fresh produce was often poor and Americans didn’t take to the self checkout system that has been familiar to Brits for years. It is also much more usual to get help packing your bag in the US and that wasn’t offered at F&E. 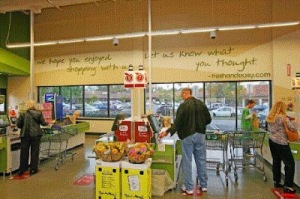 An article in the Financial Times mentions that Tesco found that US consumers like to pick up and choose their own vegetables and that they find prepackaging a bit sterile. Tesco underestimated the demand for frozen food in the US where many people have large suburban homes with big chest freezers in the garage. Jim Prevor of the Perishable Pundit blog has said that retailers tend to listen less when they enter the US because everybody they encounter speaks English. This tends to make people assume that the cultures are the same when there are in fact significant differences.

In 2007, Prevor noted an important cultural difference. F&E were not selling hot roast or fried chicken which are both staples in most American supermarkets. Prevor was astounded to find F&E trying to sell a beef lasagna, bread and wine ‘dinner made easy’ package in one of the most health obsessed states in the US. He also comments that the signage around sustainability was a too preachy for American tastes. This is interesting because I think in Britain, we are far more used to signs and CCTV and speed cameras whereas Americans like to think that they are freer to do as they please and so don’t respond well to ‘preachy’ signage.

So despite all the intricate and expensive market research done by Tesco executives, and despite attempts to amend early errors, some things were definitely lost in translation as Tesco tried to corner the grocery market in the western USA. The message is clear to the next British company that tries to break America. Even if you are rich and you think that you’ve done your research, do a little more and make sure you understand what the customer is thinking!

5 responses to “Tesco USA: not that Fresh and certainly not Easy”